The salinization is one of the forms of land degradation, which has experienced a dramatic expansion and reveals more and more worrying aspects. This phenomenon contributes to the decline of agricultural production in most irrigated areas in the world, including those submitted to arid and semi-arid climate. In Morocco, and since the equipment and the commissioning of the irrigated lands, the area of the agricultural lands affected by salinity is growing steadily. The irrigated area from Tadla indeed, is a part of the Moroccan perimeters most affected by this phenomenon. To analyze the status of land degradation and to assess the risk of expansion and worsening, the approach of the indices is a very practical and simple alternative.

This study took place in the irrigated perimeter of the Tadla plain in central Morocco. Geologically, the soils of the study area have developed from the Quaternary limestone silts. The soils of the irrigated perimeter of the Tadla are mainly of the Haploxeroll type, which is adapted to agriculture because of its depth and its balanced structure. The climate is arid to semi-arid. The average annual temperature is in the order of 17 °c. Annual cumulative Precipitations range from 200 to 600 mm between 2001 and 2014. 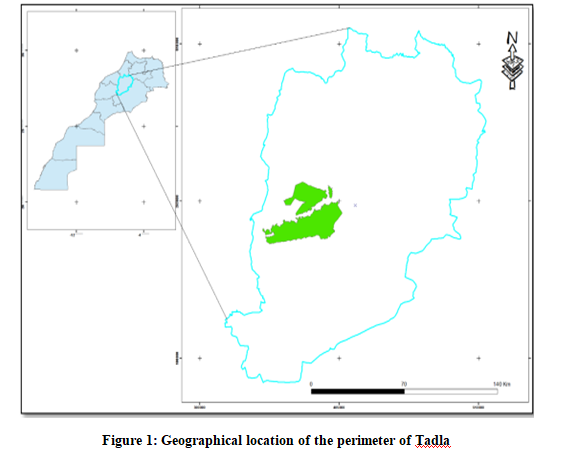 The results achieved (matrix of Confusion) show that the data of the Landsat 8 represent the reality of the land.

The assessment of the soil salinity risk, based on the occupation of land in 2016, indicates the presence of three risk classes: light, moderate, and severe. The light risk class, characterized by a low concentration of salts in irrigation water level, is located in the sub area of Beni Moussa. While the vast majority of the irrigated perimeter of Tadla is subject to a moderate risk of salinization. The class of severe salinization is mainly seen downstream from the perimeter.

Spatialization of the factors affecting the salinity of the soil has allowed showing a spatiotemporal variability. It also showed that these factors are more severe in the dry years than in the rainy ones. The integration of the land use in the formula for the calculation of the SRI helped improving the results and the spatio-temporal monitoring of salinity at the level of the plain of Tadla. The diversity of irrigation systems should be taken into consideration to improve the results of the risk index.